OTELCO went to the State House to find out the fate of a bond package that involved $15 million for broadband expansion.

Monday morning OTELCO took a road trip to the Statehouse to observe the legislature as it considered a general obligation bond that would, among other things, have freed up substantial funding for broadband expansion. Unfortunately, the Maine broadband bond did not get the two-thirds majority vote in needed in the house or the senate. If it had, voters would have been able to vote on it in the November Election. Instead, lawmakers decided to table the bond; it may be addressed in the January session, and if it’s moved forward, voters could potentially vote on it in March.

OTELCO is disappointed that the bond isn’t going to make it to voters this November. Its passage would have quadrupled private investment in broadband infrastructure throughout the state.  Today, we’ll explain why this bond is so important and discuss how we can work together to bring better broadband to the Pine Tree State.

Some quick background on the broadband bond; it was part of a $239 million borrowing package rolled out by Governor Janet Mills in June. The borrowing package covered everything from road replacement to renewable energy. One element of the package focused on economic development, including funding to the ConnectME Authority, the Department of Economic and Community Development (DECD), and the Maine Technology Institute.

In June, lawmakers rejected the package because they felt $239 million was too much and that it would be better if the package were broken up into separate bonds. In response, the governor paired the package down to $163 million and broke it into four separate bonds. The legislature was then called back for a special session on August 26th, to vote again on the proposals. They passed a $105 million transportation bond, but the others could not gain the two-thirds vote needed to pass the house and senate and go to the November ballot.

Why is this bond important?

Economic success cannot be achieved in 2019 without reliable broadband. Mainers cannot even begin to compete in today’s economy with the coverage they have now. According to the DECD, 200,00 Mainers are without adequate broadband service, which is defined as a connection above 25/3.

One important element of the bond is to use the funds in a 25% match.  That means that in order to be eligible for funding a project needs to have 75% of its funding from private and other sources. Ultimately, this would quadruple the value of that $15 million.

According to Peggy Schafer, the director of the ConnectME Authority, the money from this bond could have helped them serve thousands of rural Mainers. “With this bond money, we could have helped Internet Service providers connect 30,000 new people. Now, we may be able to connect 3,000, leaving 27,000 Mainers in the dark.”

What are the next steps?

Had the bond cleared the legislature and been placed on the November ballot, it is likely that the funds would have been available in the 2020 construction season; because it didn’t, and the soonest it could see a public vote is March – assuming the legislature moves it in January, it will be the 2021 construction season that sees the first benefit.

Heather Johnson of the DECD told the press Herald about moving forward from here “we will keep [expanding broadband] we just can’t get to as many people,” commenting that “the gap between the people who have access and those who do not grows larger every day.”

At OTELCO, we will continue to build infrastructure in Maine and the six other states we serve as quickly as resources permit. We will continue to work with the ConnectME Authority, and the Maine Broadband Coalition to promote broadband across Maine and will look at ways to stretch the dollars that we do invest. 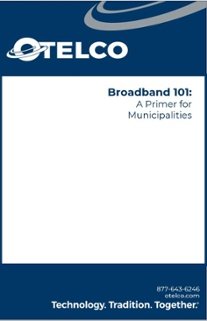 What can you do?

Every day the Internet becomes a more significant part of our lives and our economy. The legislature’s failure to move the bond is a setback, but it isn’t the end of the road. The bond is likely to come back for a vote in January, and it will be just as important then as it is now. Contact your elected officials and let them know how important this is to you, your quality of life and place in Maine, and to the State’s economic growth.

Learn What You Can do to Facilitate Broadband in Your Community