Author’s Note:  I am pleased to serve on the Maine Broadband Coalition (MBC) Advisory Committee.  After  Maine voters’ overwhelming passage of a $15,000,000 broadband infrastructure bond, I volunteered to compose a blog for MBC, and decided to share it here. — Tracy Scheckel

As the world is in the throes of a historic, albeit tragic COVID-19 pandemic, more than 76% of voters in Maine came together to create some history of their own and approved a $15 million broadband infrastructure bond to be administered by the ConnectMAINE Authority. This was a long time coming….

How Did We Get Here? (An abbreviated history)

Everything You Need to Know About Municipal Broadband Projects With the help of its long-standing partner, The Island Institute, Maine Broadband Coalition convened an inclusive meeting to initiate the Ballot Question Committee (BQC) aimed to educate the public and promote the bond’s passage.

The BQC developed and executed a campaign that began with a statewide survey to gauge support for the question and then invited support from countless Maine stakeholders. In all, more than 120 businesses and organizations came together as allies for the cause.

Despite the pandemic challenges, the campaign successfully held a virtual campaign kick-off, many press conferences, townhall meetings, and rallies in addition to dozens of op-eds and letters to the editor which published in every major outlet and numerous local newspapers statewide. A cutting-edge digital media campaign launched featuring videos of bond supporters that had unprecedented engagement for a political campaign according to a SEO and analytics perspective.

By the time the votes were tabulated, 229,736 (76.17% of voters) Maine citizens conveyed a message that universal access to fast, reliable Internet is critical to Maine’s infrastructure.

A Reason to Celebrate?  ABSOLUTELY!  But, It’s Just the Beginning

The estimated cost to connect every location in Maine to high speed internet is around 600 million dollars. The two-thirds public/private match of the bond funds to facilitate a broadband infrastructure investment of $45,000,000 is a good start, but numbers don’t lie; we have a long way to go.

Looking to expand broadband in your town? Book a consultation with OTELCO!

The ConnectMAINE Authority provides numerous resources and tools, including a Broadband Action Plan, which guides both public and private entities as they embark on broadband expansion initiatives.

The ConnectMAINE Authority is in the process of rule-making and reevaluating the grant process to maximize the impact of the bond funds. One thing we do know is that grant applications will require as much as 2/3 public/private matching funds. To that end, communities and providers will need to work together to identify those public and private funds as well as build community support for the appropriation of any public funding. Connect Maine provides numerous resources and tools, including a Broadband Action Plan , to guide both public and private entities as they embark on broadband expansion initiatives.

What’s Next for Maine Broadband? Find out on August 11th at 4:30 pm

The Maine Broadband Coalition invites you to join a listening session to hear about just that. We’ll take just a few minutes to celebrate the bond victory, then we’ll discuss what the $15,000,000 bond means for you, ways to address Maine’s economic recovery, and how to traverse the frontier of digital infrastructure. Click this link and join us on Zoom at 4:30 pm for a quick listening session about the future of Maine broadband! 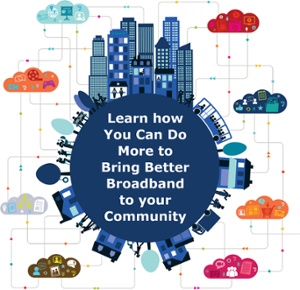